Tonka bean, why is it risky to use this aromatic seed?

The tonka bean is an aromatic spice that is frequently used in certain cocktails and desserts, but it can be dangerous to health. It has in its interior an element, coumarin, which is toxic in high doses.

For this reason, in certain countries, its use is prohibited. We are going to tell you about the associated risks and how you can get the most out of this condiment to improve the organoleptic characteristics of many dishes.

In the first place, it is key to note that when you are under a pharmacological regimen, it is advisable to first consult a specialist before including spices in the diet. Many of them can have drug interactions, enhancing, reducing, or varying their effects. In some cases, the result would be dangerous for the body, so it is essential to be very careful about it.

How is the “tonka bean”?

The tonka bean seed is grated for use in sweet preparations or cocktails.

As far as appearance is concerned, the tonka bean has a black color and an elongated shape. The surface is rough and the seeds are mainly composed of dry matter.

From a nutritional point of view, its content of zinc, iron, copper, sodium, lead, and magnesium stands out. But what really determines this food is that it has coumarin inside, an element that is also found in cinnamon.

In low doses, coumarin is not dangerous. However, when the toxic limit is exceeded, it can alter blood coagulation and cause liver and kidney problems. Therefore, it would put people’s lives at risk. This is indicated by research published in the journal Food Chemical Toxicology.

In any case, if consumed in a controlled manner, this substance would have certain benefits for the body. On the one hand, it would act as an antibacterial agent. There is also some evidence that it would help prevent the growth of certain types of tumors. A  study published in Anti-cancer Agents in Medicinal Chemistry confirms this. Even so, we would be talking about a contribution of fewer than 0.1 milligrams per kilo of body weight.

Properties of the “tonka bean”

In addition to the micronutrients mentioned, the tonka bean is capable of providing a significant amount of protein. These are of low biological value but can help cover the daily requirements of the same.

Therefore, the development of many complex pathologies that affect lean mass, such as sarcopenia, could be prevented. This is evidenced by research published in BioMed Research International.

Of course, we must bear in mind that in order to optimize protein intake, it is important to include foods of animal origin in the guideline. Thus, the consumption of all essential amino acids in optimal quantities is ensured. These types of nutrients have a good score in terms of digestibility, which improves their use at the intestinal level.

Also, keep in mind that tonka bean can provide important antioxidants to maintain good health. These compounds neutralize the formation of reactive oxygen species. Elements that could cause damage to DNA replication if they accumulate in the body.

How is tonka bean used?

The tonka bean can be used in the kitchen especially to prepare sweet dishes. Among them, cookies, biscuits, ice creams, and creams stand out. It even looks great when combined with chocolate. It has even been tested for inclusion in cocktails, with excellent results. Of course, always in small quantities to avoid reaching the toxic limits already mentioned.

As a general rule, it is added to dishes in a similar way to nutmeg. A series of broad beans are kept in an airtight container and a little of the seasoning is grated just when it is intended to be used. It would even be possible to use it with certain liquids to produce infusions that are later used to improve the flavor of the preparations.

As for its flavor,  it must be said that it is reminiscent of a mixture of cinnamon and cloves. It has a spicy touch, but also a background similar to that of dried fruit. It could even be included in savory recipes, although as a general rule it is more common to find it in confectionery. Of course, it is an excellent alternative to vanilla, providing different and deeper flavor notes.

What is important to keep in mind is that pregnant women and people who belong to risk groups should take certain precautions when including this condition in their diet.

In fact, it would be best to avoid it so as not to take unnecessary risks. It is unknown precisely if coumarin can really negatively affect the health and development of the fetus, conditioning the genesis of malformations.

During this stage, it is better to be restrictive regarding the consumption of certain products to avoid damage that could alter the closure of the neural tube or the formation of the organs. If in doubt, it is best to consult a pediatrician or nutritionist for advice based on the latest evidence.

“Tonka bean”, is a tasty condiment, but with risks 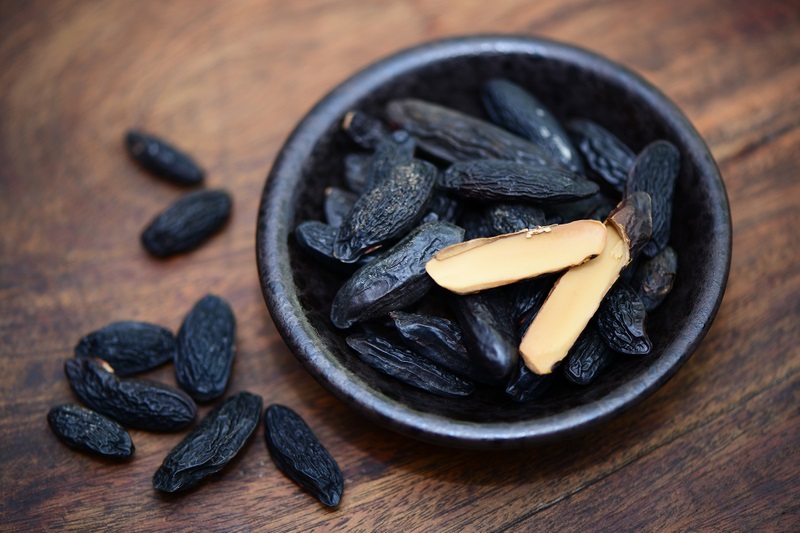 As you have seen, the tonka bean is a very interesting condiment to use in the kitchen, especially in pastries. However, its intake in large quantities is dangerous for health due to the presence of coumarin in its interior, so the doses used must be moderated. Even so, it is capable of improving the organoleptic characteristics of many preparations.

To finish, we must bear in mind that the inclusion of spices in the guideline is usually recommended, as long as it is in optimal quantities. Normally, we talk about elements that have many antioxidants, which neutralize the formation of free radicals and their subsequent accumulation in the body’s tissues. Thanks to this mechanism, the development of many chronic and complex pathologies are prevented.