Organizing a trip to Bora Bora: everything you need to know

Bora Bora is a magical corner in French Polynesia. Discover why it is one of the favorite destinations for lovers.

Organizing a trip to Bora Bora is a dream for couples in love. The beauty of its paradisiacal beaches makes this island in French Polynesia a dream place, one of a kind. And there are also many who come to this island to photograph its large lagoon separated by impressive coral reefs.

In addition, for those who want to know more about the area. The island of Bora Bora is close to other islands of great beauty such as Maupiti, Tahaa, and Raiatea. These also have crystal clear waters perfect for practicing water sports such as diving or snorkeling.

Some facts about Bora Bora

The island of Bora Bora is located 230 kilometers northwest of Tahiti. The most peculiar thing about this island is its interior lagoon and the impressive coral reef that surrounds it. This has given rise to the creation of different islets, called Motus, located around the central island and creating a unique landscape. Among them, the Motu Tapu stands out.

Although the island is practically flat, Mount Otemanu stands out, with is more than 700 meters high. Another the curiosities of Bora Bora is that it has a single road that borders the entire coast . With little more than 32 kilometers, we will have one day left to go around it completely, and that’s stopping to admire every little corner.

The history of this island in French Polynesia begins approximately in the year 300 AD. At this time, the small towns served as residences for sailors and navigators who traveled to other parts of the continent, especially to new destinations such as New Guinea, Hawaii, or New Zealand .

How to organize the trip to Bora Bora

For those looking for a complete Bora Bora trip, a visit to the Lagoonarium Marine Park is recommended. This is located on a private islet and offers the opportunity to observe the aquatic fauna of the area and even have the opportunity to swim among sea turtles and dolphins. It is a perfect activity for the whole family.

You should also not miss a visit to Vaitape, the central town of the island. In it, you can visit the craft center and the tomb of Alain Gerbault, a famous navigator who managed to circumnavigate the world in 1929. Nearby are other interesting towns such as Anau, where it is also possible to buy products and articles from the island.

Finally, a visit to the Musee de la Marine de Faanui, another nearby town of Vaitape, is highly recommended. There, more than 40 models of different types of boats are exhibited. In fact, these include legendary ships like the Bounty and the Calypso.

And already within the excursions within the island, the climb to Mount Otemanu, the highest point of Bora Bora, stands out. Nor should you miss the excursion to Mount Pahia, which stands out for its dense vegetation rich in exotic flowers such as orchids. Both excursions offer incredible views as a result.

Finally, as you might expect, Bora Bora is a paradise for lovers of water sports. One of the most recommended activities is to enjoy the sunset from a catamaran.

Tips for organizing your trip to Bora Bora 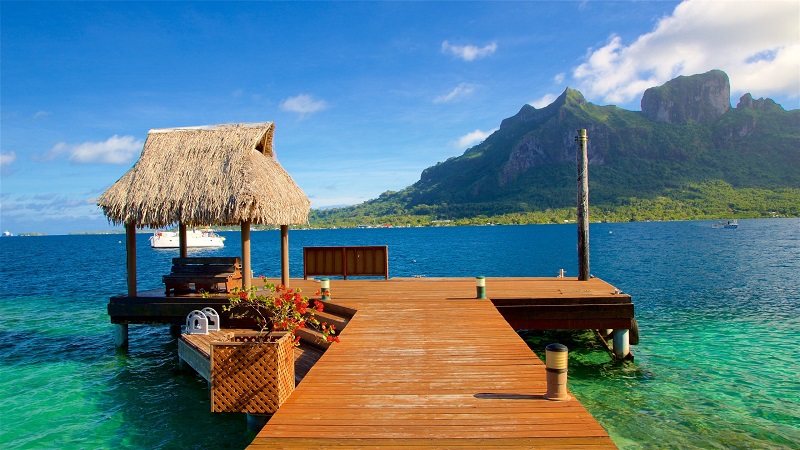 The fastest way to get to Bora Bora is by plane. Generally, most flights depart from Tahiti-Faa’a International Airport and the journey takes about 50 minutes.

In addition, some hotels on the island are responsible for sending their own boats to the airport to pick up travelers. If you don’t have this service, you just have to take the ferry that goes to Vaitape.

There is no public transport on the island, but there is the possibility of hiring a jeep service to travel around it. It is also possible to rent a vehicle. However, motorcycles or bicycles are more recommended, as they are much cheaper and more comfortable to move around the island.

Another tip is to make sure you pack as complete as possible since in Bora Bora they do not have some minimum services. Among the essential things to bring are sunscreen and personal hygiene products. Buying them on the island can be excessively expensive.