Differences between DNA and RNA

DNA is the molecule that contains genetic information, while RNA enables proteins to be synthesized.

DNA and RNA are basic molecules for life as we know it. They make up our genetic material and allow us to store information on all cellular structures and functions.

Viruses also use this type of molecule to store their genetic information. However, they are different from our cells and each one can have one of the two molecules or both. That is, they can have DNA and RNA, or just one of the two.

When it comes to our cells, both DNA and RNA are essential and similar. However, they present a series of differences that we will see in this article to better understand cellular functioning.

What are DNA and RNA? 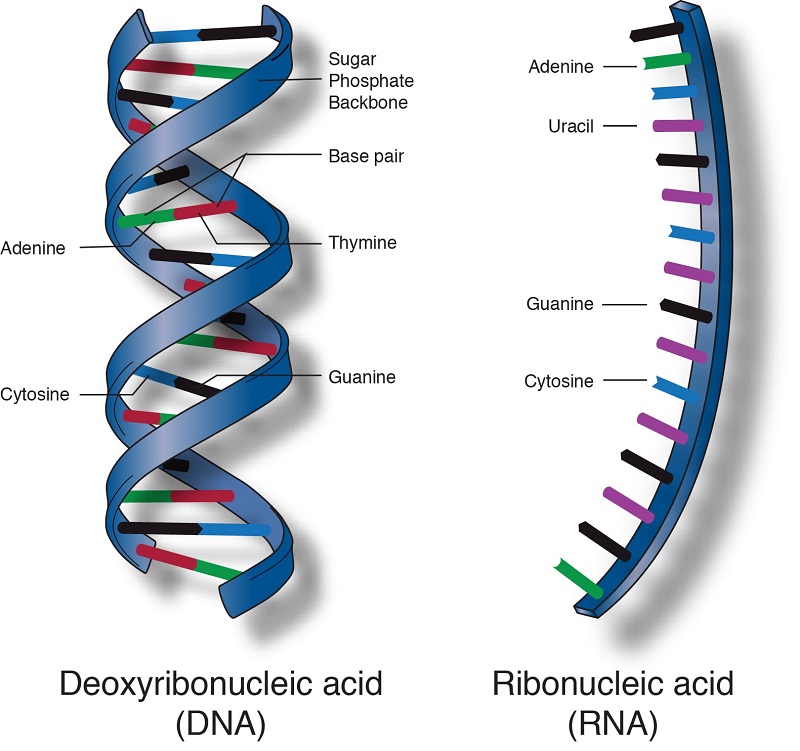 DNA contains genetic information. It is found in the nucleus of cells and, to a lesser extent, in another cellular part called the mitochondria. It is made, in turn, by other simpler structures called nitrogenous bases.

What makes DNA a ‘source of information’ is the combination of these bases, which occurs differently in each organism. That is, it is what determines our genetic code and makes us different from each other.

RNA, for its part, is in charge of protein synthesis. While DNA is responsible for all genetic information, the function of RNA is to make this information processed by cells and they can fulfill their functions.

What differences are there between DNA and RNA?

To understand the differences between the two molecules, it is necessary to know their structure :

The double helix of DNA is formed thanks to the fact that the nitrogenous bases of the two chains combine, which does not occur in RNA. The difference between the chains of both is the types of bases that form them. In DNA we find a base called thymine, while in RNA it is replaced by uracil. Likewise, the sugar that makes them also varies in the structure of both.

Another difference is that DNA has a greater weight. This is also because it is usually a more complex and larger molecule.

The location of both molecules is different. DNA is found in the nucleus or the mitochondria. The RNA, meanwhile, can be in other parts of the cell, such as ribosomes.

Furthermore, RNA has different subtypes depending on its function. We found messenger, transfer and ribosomal RNA. Each of them plays an important role in protein synthesis.

Although the explanation of DNA and RNA is complex, the important thing is to know that they are different on a structural and functional level. Both molecules are necessary for cell function. At the structural level, the most remarkable thing is that DNA is double-stranded and RNA has only one chain.